If Pure Spec is nothing else, it’s a celebration of Edmonton’s nerdery. And what would a celebration be without a party? Would it be more awesome with two parties? Good, because we happen to have two parties. 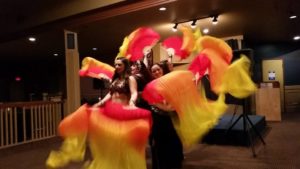 Friday night, the Opening Night Party starts at 8pm in the main hall. This party features the geeky belly dance creations of Eclipse Fusion, keynote addresses from our Guests of Honour, and a high-energy lightsabre forms performance from Echo Base Temple. I’ll also yak for a bit about the festival, but hey, you can always get up and hit the cash bar around then. We’ll have some hors d’oeuvres available, and the concession will also stay open in case you get the munchies later on. This is also the perfect time to peruse the Silent Auction table and sneak in some bids.

Saturday night, the Concert Party also starts at 8pm, also in the main hall. The evening will feature a concert by Guest of Honour Vanessa Cardui, as well as a Trivia Contest with cash and other prizes. Again, there will be some closing remarks from me; see earlier note about hitting the cash bar. We’ll have more hors d’oeuvres and the concession will also be available.

We are trying something new at this year’s Pure Spec parties, and I hope it becomes an annual tradition. Conceived of by local nerd and friend of the festival Devin Bruce, Pure Spec’s very own cocktail, The Grand Nagus, will debut at out parties this year. We’ll serve both an alcohol and non- version so nobody has to miss out on the fun.  You’ll have to come to the parties to find out what’s in it (you know how the Ferengi guard their trade secrets) but we promise* either version will be a delicious summer treat.

Due to the cash bar, both parties are strictly 18+ only. We’re working on making them all-ages next year, but for this year, no minors.

Short and sweet this time. So short and so sweet, I’ll be back with another post tomorrow. Talk to you then, Spectacles!

*From the Ferengi: The word “promise” is not used in any legally binding matter. Price of the drink is non-refundable.